Yonder comes a rabbit!
Well, for those who don’t know, two thirds of the Greasys (myself, Derek, and Aisling) moonlight as Irish traditional musicians also (you’d have to, really). In this guise, we had a fantastic 10 days recently in Turin, Italy, playing at Festival Irlandese, an overwhelming intensive experience which heaped all bits of Irish and Celtic culture on the northern Italians.

As we are writing now though, we’re dusting off the cross-tunings and 5th string, and getting ready to host the second of a double-header of old time this Easter weekend in the Cobblestone pub, Smithfield, Dublin.

The long-running, never-tiring Saturday afternoon old time jam run by the legendary Bill Whelan and Ben Keogh (both of the highly influential Rough Deal Stringband) will be on at its usual time of 4.30. This will be followed this evening by the Greasy Coat Stringband hosting a follow-on jam at 7.30-10pm. If anyone is around and wants to play along or listen, feel free to drop by at 7.30. See you then, if not, then happy Easter!

Sorry for the cheesy heading, but sometimes we just can’t help ourselves. So, another happy new year folks….kind of strange really, as our last post was wishing a happy new year for last year. Well, things got ahead of us and we didn’t get around to too much posting about our activities, which were varied from finishing college work to buying a van to moving house to getting engaged (that’s right!) to heading to festivals in the van to playing the odd gig in between and then, back to college.

This year, 2016, has started interesting for us though. Some exciting old time stirrings happening in the Spring in Ireland, more of which will be elaborated when ’embargoes’ are lifted.

As for the band, the Greasys are working on a kicking new set with guitarist Paul Mulcahy (of Prison Love). Our first ‘official’ outing of this set will be in the Back Room of the Cobblestone, Smithfield, Dublin 7, on February 18, supporting the UK-based The Black Feathers (although Ray Hughes is a Dub).

Promises to be a great night and we’re really looking forward to not only playing for the first time in the Back Room of The Cobblestone, but also to publicly air our new tunes….of course, when we say new, we are talking at least 50 years old (bar one or two cool proper ‘new’ ones which we just have to include).

Well, we went into a bit of hibernation there for a few months up to Christmas. With new personal projects like college etc, we decided to take a break from gigs. The regular old time session kept going through the dark months and still going strong. All old time musicians welcome to come down to the Thomas House on Monday nights from 9pm for a tune or a listen or whatever suits you.

With that freezing weather outside, it’s too hard to hibernate too much, so we’re back out looking for gigs, if anyone has anything fiddlenbanjoey in mind.

Also, we’ll be up at the Kilteel CCE in Co Kildare at the end of this month, playing some old time sets in between the jigs and reels for the Comholtas branch’s annual St Brigid celebration and art exhibition opening night. Then it’s away off to Tipperary for a charity on February 13….. a Friday!!

Good luck to all in your musical endeavours this year and, if you’ve made music a New Year’s resolution, be smart: make it OLD TIME!

So it’s official: The Greasy Coat Stringband are returning to the Dunmore East Bluegrass Festival this year, which takes place on August 22,23 and 24. We had a great, busy weekend in the picturesque seaside town last year and are delighted to be asked back by Mick Daly and the team organising the festival.

This news is on the back of a great weekend playing around Dublin, at the Mespil Road Irish Village Markets food market on Thursday, then being part of the OK Corral Busking Trail as part of the Dublin Goes Country weekend.

We’re now honing our setlist, to make it vegan-friendly ahead of the upcoming Cornucopia Vegan Summer BBQ Hoedown. There’ll be no Cluck Old Hens cluckin’ in the pot, nor will any Big Eyed Rabbits be getting fried in any pans at this one.

But, yeah, we just wanted to share this great news with you old time fans and hope to see you at Dunmore East this August

Well, just like last year, we were hanging round, twiddling our thumbs wondering what we’d get up to for the summer. And, in between having fun indulging our Irish trad side at the Willie Clancy Summer School and various other sessions with Trad Rocks, we’re now looking forward to a busy August.

On July 24, we’ll be joining the lively Hunt & Gather team for their Midsummer’s Night Party. A week later, on August 2, is the much-awaited Roisin and Luaighaidh’s wedding in lovely, magical Leitrim, followed swiftly by the mouth-watering Cornucopia Summer Vegan BBQ Hoedown. We’ll have a break before joining up with the Jack of Diamonds Festival for the third year in a row, hosting an old time jam in Sweeney’s on Saturday August 17, before joining forces as part of the Bog Standard Stringband (with Ben Keogh and Tim Rogers formerly of the Rough Deal Stringband) in McGing’s, Westport, Co Mayo on August 17. We’re waiting on official confirmation of another massive, exciting date to be finalised in late August. We’ll have another break before the Bog Standard Stringband is assembled once again for the Bunratty Banjo Festival in Bunratty, Co Clare in late September.

As usual, you can catch us on Fridays at Percy Place on the Grand Canal, with Irish Village Markets, where we play and eat and play some more… and maybe eat more too.

So, happy Summer folks and hope to see you round.

Just returned from another glorious and colourful Fire In The Mountain, where we were hosting workshops, playing for square dances and joining in the general fun and frolics that goes down in the valleys of Wales. We got to play with some amazing old time musicians, not least among them the Foghorn Stringband. Also there was Ben Keogh and Tim Rogers, two of Ireland’s top old time players.

We got to see wonderful acts like Aaron Jonah Lewis and Lyndsey McCaw of the Corn Potato Stringband, as well as the Loose Moose Stringband, both of whom are playing at the Westport Folk and Bluegrass Festival http://westportfolkandbluegrass.com/ from June 13 to June 15, which boasts a strong old time contingent this year, including fiddle and banjo duo Jock And Vera, as well as a special old time fiddle workshop with Aaron Lewis on the Saturday.

As much as we enjoyed hearing and playing some exceptional old time over the weekend, a special mention must go out to the manic ramblings of MikArtistic’s Ego Trip. This guy, from Leeds, caught our attention as we were en route to the Foghorn’s ‘stringband workshop’, with his musings about a plastic fox in his garden with a snail on its head. From there on, we were hooked on his ego trip, as he made up gaelic words, sang about cancer, how his guitarist Johnny ‘got an offer from another fucking band’ and anything else that came to mind http://www.mikartistic.com.

Also, a big thank you to those musicians and friends we got to hang out and jam with over the weekend and a BIG THANK YOU to the organisers, in particular Alan and Joe and Ed Hicks, who made it possible for us to get on over to Fire In The Mountain 2014.

Already looking forward to next year!

We had a wonderful night and enjoyed playing for all of you who came to the Whelan’s Folk Club on Tuesday, April 29, organised by Jonny Tennant. Despite the fact that it may not be the ideal setting for a traditional folk club, due to the noise pollution of adjoining venues in Whelan’s and the general volume of general punters in the bar, it was a fun time of old time fiddle and banjo tunes. 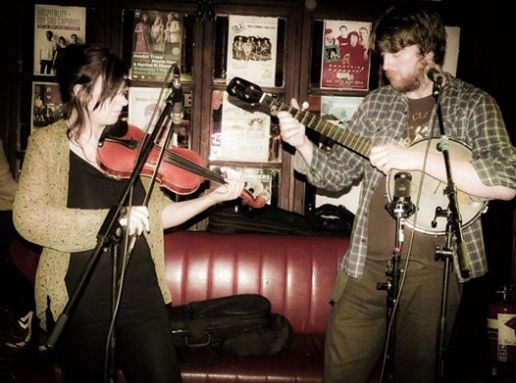 So, from now and for the rest of the summer, The Greasy Coat Stringband will be performing with Irish Village Markets, Wednesdays at East Point Business Park at 12-2pm, and Fridays from 12-2pm at Percy Place on the Grand Canal, where you can have a taste of some excellent fresh-cooked food and some old time tunes and songs served up from us, The Greasy Coats. And trust us, we’re the Greasiest thing on offer at the markets!

So we’ve launched our Bandcamp page: http://www.thegreasycoatstringband.bandcamp.com. And, in preparation for our EP recording session, we were running over some tunes in our noisy flat. Here are a sample of two we were thinking of using: Jimmy Johnson and Robert’s Serenade. They are by no means a definitive recording but will give you an idea of what we’re about, with some pretty fine fiddle and banjoing!

I suppose it is about time that we got ourselves up and running with this sort of fandangled business and so, WELCOME TO THE GREASY COAT STRINGBAND wordpress SITE.

We’re going to use this site in conjunction with our facebook page to keep up to date info on sessions, gigs and festivals we encounter this summer. We might even be inspired to write the odd word or two in keeping with the blog buzz.

So, to get cracking and let you know where we’ll be bangin’ and sawin’, we’ve set up the ‘Upcoming Events’ section, which will detail what we’re doing and when we’re doing it. Our next outing, at the time of writing, will be at the Hatch Bar in Celbridge, on April 11, for what promises to be a fun, packed session with Cristina Quill et al.

In other news, The Greasy Coats are putting together some funky tunes for an EP, which we plan on having by late May.

We can’t think of anything else at the minute, but we’ll keep you posted.